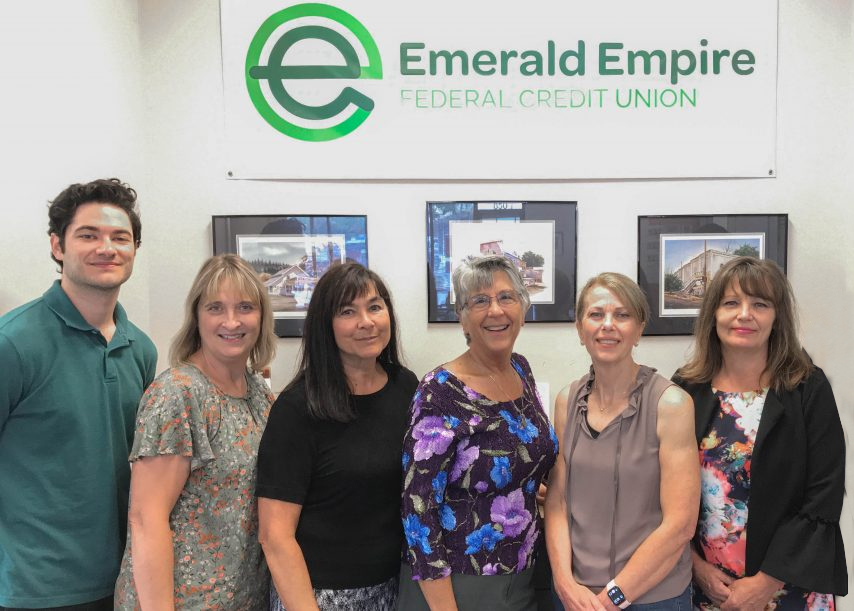 “Big enough to serve … small enough to care.” That’s our motto. That’s what we do.

With a membership base of about 4,300 people, we’re not the largest credit union in the area. But we don’t want to be. We are small enough to know our members – your name, your face, your voice on the phone. We strive to understand your individual needs and take the time to help you with your financial decisions.

We are a member-owned cooperative. Our Board of Directors and Supervisory Committee are all volunteers, elected by members, who give their time and talent to ensure the safe, sound operation of the credit union.

In the early 1950s the printer’s union of Guard Publishing negotiated with their employers to organize a credit union. Several printers had belonged to credit unions before and felt the employees of the R-G could benefit. And on Nov. 8, 1954, the Emerald Empire Federal Credit Union was organized with about 25 original members.

The credit union had many obstacles to overcome in its first decade. There was no permanent office, no regular hours and a lack of capital. The hard working part-time treasurer literally ran the credit union out of his coat pocket.

But the credit union grew, slowly but steadily, through nothing more than word of mouth. After some time, the wife of the treasurer set up regular office hours, and the newspaper allowed the credit union to have a desk in the basement behind the rolls of newsprint, as well as a closet in which to store the records. The credit union eventually rented a room at the paper for $65 a month.

Then, in May 1976, after more than two decade in business, the credit union got its own official home, at 1065 High St., in a building across the street from The Register-Guard. We stayed there until February 1998, when we moved to the current Gateway office in conjunction with the newspaper’s move from downtown Eugene to Chad Drive.

Just a reminder, the EEFCU is CLOSED TODAY Monday, January 16th in honor of MLK Day.

Just a reminder, the EEFCU will be CLOSED Monday, January 16th in honor of MLK Day.

Be Aware of a Variety of Scams

Be aware of fake calls, texts, and emails claiming to be known companies OR Law Enforcement Agencies, these can be [..]